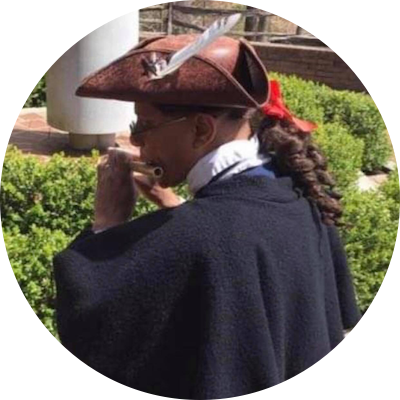 Don Francisco is a New Orleans, LA native. He graduated from St. Augustine High School in May of 1983 and enlisted in the US Army that Summer. He graduated from the Armed Forces School of Music in Norfolk, VA. He served with The 5th Infantry Division (Mech) Band in Fort Polk, LA, The 8th US Army Band In Seoul, South Korea and retired from active duty with The US Army Old Guard Fife and Drum Corps at Joint Base Myer-Henderson Hall (formerly known as Fort Myer), Virginia completing 30 years of active duty service. Don also traveled extensively performing nationally and internationally. While on active duty he attended a variety of diverse military courses, also Northern Virginia Community College, Washington Bible College, University of Maryland, NSU of Louisiana and George Mason University pursuing studies in Music, Education, Public Relations and American History. He performs Gospel, Classical, Colonial, Jazz, Folk and a few standards on various flutes, fifes, penny whistles and panpipes.

Currently, he is a History Interpreter & The Resident Fifer at George Washington’s Mount Vernon, where he educates guests about George Washington, his family, and the Slave Community, like brothers Frank and William Lee and many others. He teaches the importance of music in the American Revolution, from critical communication to enjoyable entertainment. He also performs at schools, various local venues, assisted living & nursing homes.

As a Deacon, he actively serves and ministers in music at his home church, International Calvary Church in Springfield, VA. He is a volunteer at The National Museum of the United States Army and a Son of the American Revolution by way of his Great Grandfather (5x) Jean Pierre Normand. Don has been married for over 30 years to Grace Kang Francisco of Seoul, South Korea. They have two adult sons, Samuel & Jonathan. He welcomes you to contact him at flute4JESUS@gmail.com