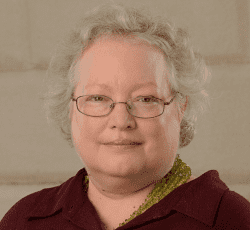 Mary V. Thompson grew up as an “army brat” in the United States, West Germany, and the occupied city of West Berlin. She began working at Mount Vernon in 1980, after earning a B.A. in History, with a minor in Folklore, from Samford University, and an M.A. in History from the University of Virginia. Mary has filled a number of roles at Mount Vernon, where she is now the Research Historian (2008-present). She curated the traveling exhibition, Treasures from Mount Vernon: George Washington Revealed, which opened in 1998. Her first book was “In the Hands of a Good Providence”: Religion in the Life of George Washington (University of Virginia Press, 2008). More recently, she published A Short Biography of Martha Washington (Applewood Books, 2017) aimed at the young adult market. Her latest book is “The Only Unavoidable Subject of Regret”: George Washington, Slavery, and the Enslaved Community at Mount Vernon (University of Virginia Press, 2019).

Episode 6: “Leaving” Nancy Carter Quander was just a child when George Washington died in December 1799, but his death changed her life forever. Washington’s decision to emancipate his enslaved people in his will had consequ…

Episode 2: “Laboring” As an overseer, Davy Gray was entrusted by George Washington with the management of the enslaved laborers on Dogue Run Farm. His weekly reports to Washington revealed progress toward Washington’s goal o…